The Workshop of Dionysus first met in Tarquinia, Italy, 20-23 November 2013. It was formed by Emiliano Li Castro, Artistic Director of the European Music Archeology Project (EMAP). Its first meeting was facilitated by Adje Both, the EMAP’s Exhibition Curator. You can view the schedule of this meeting here.

This multi-author blog was created to continue discussions online and to stimulate wider interest and participation in the revival of ancient doublepipes from musicians, instrument makers and scholars. 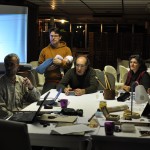 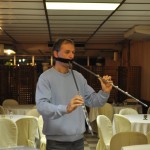 There are three ways you can participate:

The name “Workshop of Dionysus” highlights the powerful relationship between the doublepipe and Dionysus – the god who was benign to human beings and liberated them through ecstatic dancing, singing, wine, and drama. Street processions called kōmoi, with singers called kōmōidoi, were frequently accompanied by pipers called aulētai. In the Classical period, dramatic performances were staged during the Athenian festival called Dionysia in honour of the god. During this festival, the aulos could most commonly be heard accompanying choruses, both in comedies and tragedies, but also in crowd-pulling solos. In the post-Classical era, guilds of theatrical artists – singer-actors, playwrights, prop-makers, musicians – called themselves technitai Dionusou, “craftsmen of Dionysus”. Records of these guilds often mention aulētai (solo pipers), choraulai (choral pipers) and aulōidoi (singers accompanied by pipers) as members. Thus the name “Workshop of Dionysus” combines allusions to three things: discovering a beautiful unknown, the central role of the aulos in drama, and an interdisciplinary collaboration that enriches cultural life. These three aspects are essential to our group: discovering the unknown, making dramatic music, and getting highly-skilled specialists (instrument makers, performers, composers, researchers, etc.) to cooperate productively.