Posted on 16 September 2019 by Barnaby Brown

So far as I am aware, no aulos player today uses reeds made of Common Reed, Phragmites australis. We all use Giant Reed, Arundo donax. The reason is simple: the doublepipe revival began in a cultural environment that only esteemed Arundo. The expert reed players who influenced us had little or no experience using Phragmites. It cannot be ordered from reed cane suppliers because Arundo is the only species used to make the reeds for oboe, bassoon, clarinet, Sardinian launeddas and the bagpipes of Spain, France and Scotland – and this has been the case for at least 300 years. Had the aulos revival begun in Africa or Asia, it would have been a different story.

On 30 August, I made my first Phragmites reed. Here it is beside a prospective partner (scraped but not yet formed) with reed caps made of driftwood. The off-cut ring shows the wall thickness of the unworked tube:

The scrape is where high precision, excellent light, a keen eye and patient perfectionism make all the difference. It must be evenly scraped all the way round, with a smooth taper all the way to the tip, no bumps. Look at the fibres of the cane closely. Use a quality reed knife and know how to sharpen it. I picked up tips from many people but particularly from Callum Armstrong and Robin Howell. Thank you both for sharing your expertise! I am especially grateful to Robin for sharing his suspicion that Phragmites fitted the historical evidence – literary and material – better than Arundo. 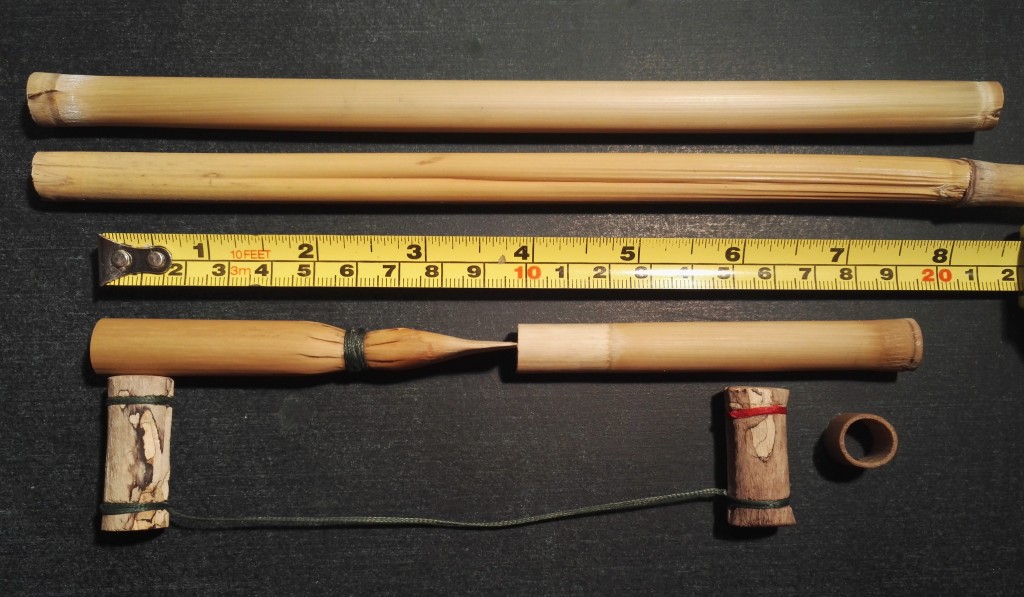 In this photo, the internodal section above the tape measure shows what has happened to most of the stems of Phragmites I have harvested since Robin shared his concern that were not using the same material that auletes used in Classical antiquity. As Phragmites dries, it wrinkles. Deep buckles form that render it useless. Not expecting my first attempt at a reed to work out, I used an internodal section that had partially buckled. There was only enough cylindrical length to make a singleton. Now I regret that I didn’t give myself the option of making a complete ‘yoke’ (zeugos) of two reeds from the same internodal section.

Astonishingly, this singleton plays like a dream in my Pydna, Elgin and Megara auloi. I can’t believe it! A reed which took relatively little effort to make – my first attempt using Phragmites – plays better than any of my Arundo reeds, which are made by makers far more experienced than me. Its tone is gorgeous, its response is exciting and reliable – you might say ‘bomb-proof’ – and it has a dynamic and timbral range superior to anything I have experienced. I don’t think this is due to my skill but to the material: Phragmites australis.

Perhaps it is beginner’s luck, but I will stick my neck out and predict that most doublepipers will switch over to Phragmites within three years. Here are my reasons why, with the proviso that this is initial speculation, far from proven:

Before the time of Antigenidas [fl. 387-53 BCE], when they played without plasticity [aplástōs, ? without pitch-bending], the time for the cutting, they say, had been under Arcturus in the month of Boedromion [i.e. late September: Arcturus was barely visible before 20 September in Boeotia, in the late 4th century BCE, and Boedromion ends at the new moon after 21 September]…

When they embraced the plastic [plásis] style, the cutting changed too: now they cut it during the months of Skirrophorion and Hekatombaion, shortly before or just at [the summer] solstice. They say it becomes usable within three years, requires little preparation [kataulēsis, presumably either soaking the reeds before playing, or breaking in new reeds], and the reeds permit down-pulls [kataspásmata, ? greater downward inflections of pitch]. This is necessary for those playing with plasticity [lit. “of plastic pipe-playing”].

This translation (and those below) is my own revision of Andrew Barker’s, informed by conversations with Stefan Hagel and Sylvain Perrot, and by my own experience as an aulos player. Today, Arcturus rises some weeks later. The time for harvesting cane, however, has nothing to do with the influence of the stars: in ancient Greek culture, dates in the agricultural calendar were fixed to star-risings simply because the lunar months moved. A thirteenth month had to be inserted about every third year to keep the months in sync with the seasons.

I began harvesting Phragmites last year, initially finding it in Cambridgeshire, Tarquinia and Cyprus. My first mid-June harvest (for the more bendy, ‘plastic’ playing style) was in Athens with Chrestos Terzēs:

My first late-September harvest (for the older, ‘non-plastic’ playing style) was in Orte, just north of Rome, with Marco Sciascia. But the best stand of aulos cane I have found so far was with Felipe Aguirre in Palma de Mallorca, a couple of months ago. In a convenient location near the airport, I found a mass of canes suitable for both the reeds and bodies of pipes, some of them naturally seasoned and ready for use. Here are four photo albums showing details of the cane I harvested in each location:

Like Robin Howell, Stelios Psaroudakēs suspected that Phragmites australis was the most likely candidate for ‘aulos cane’ (auletikos kalamos) over 25 years ago. He recently uploaded a PDF, ‘Auletikos Kalamos’, of the relevant pages from his doctoral thesis (1994). Thank you Stelios! These 15 pages are essential reading for every aulos player – solid scholarship to be re-read every few years, guiding our practical work and opening our minds to potentially better solutions.

It is regrettable that we did not respect Theophrastus’s writings earlier. By using reed cane ordered on the internet, swayed by convenience and modern Western cultural prejudice, I think we have lost a lot of time and energy travelling in the wrong direction. Arundo makes life as an aulos player unnecessarily difficult. The fact that Phragmites is disparaged or completely overlooked by Western reed makers is perhaps best explained as a cultural blind spot. This appears to be a perfect example of preconceptions hindering progress.

I ruled out making aulos reeds in 2013 because I found it so frustrating. None of my efforts were successful. My experience using Phragmites this last fortnight, however, has completely changed my mind. I am converted: from now on, I will make my own reeds.

It is almost time for the late-September harvest. I would encourage every aulos player to go out and find some Phragmites. It is one of the most widely distributed flowering plants in the world! This photo shows the basic difference between Arundo and Phragmites: 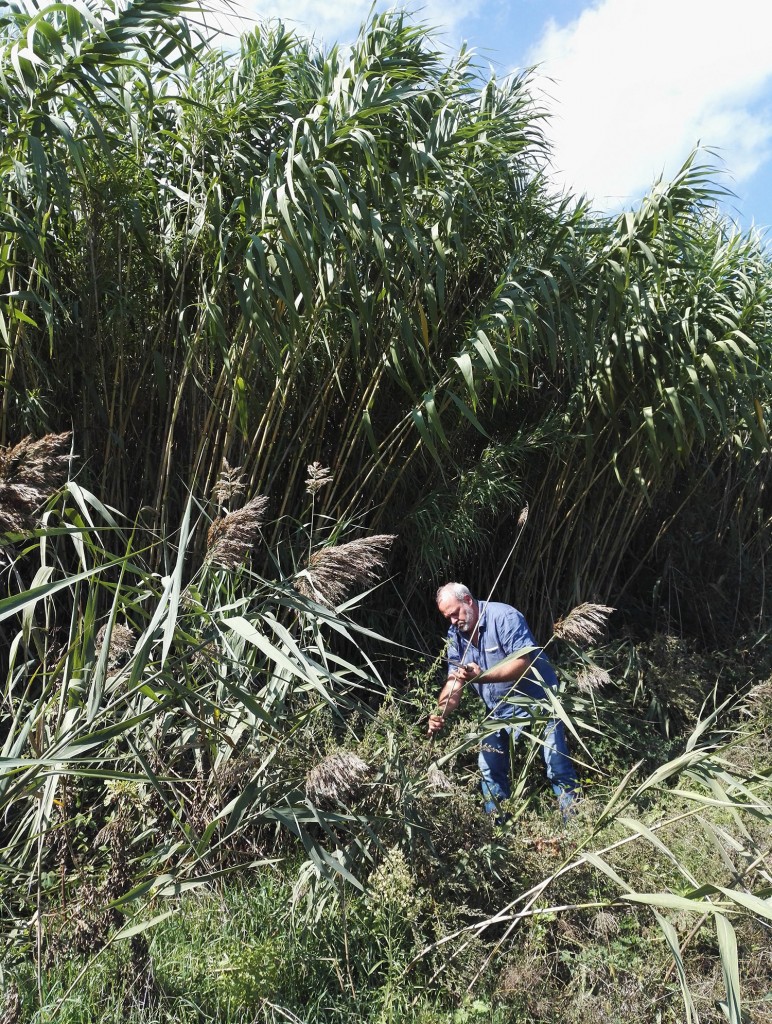 Phragmites is in the foreground, being cut by Marco Sciascia. Arundo donax is taller: its name is Giant Reed for obvious reasons. I took this photo in Italy in late September; the next one I took in Athens, two days after the summer solstice: 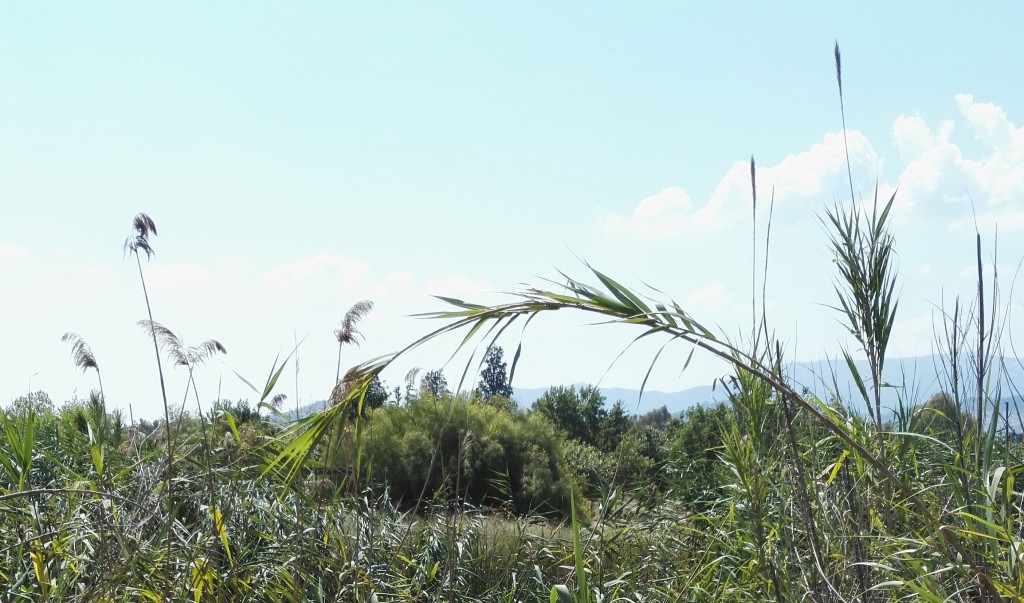 Note how the flowers of Arundo (on the right) are bolt upright, whereas the flowers of Phragmites (on the left) droop to one side. Arundo can also be distinguished by the presence of offshoots on older stems; many more ‘children’ grow from its nodes than on stems of Phragmites.

Variation in the material characteristics of Phragmites is enormous. It really matters where and when you harvest – even more so than with Arundo. The variation is caused not only by different growing conditions (climate, quality of soil and access to water) but also by reticulate evolution. This means that there are no sharp borders between subspecies:

At present, five species are recognized, of which Phragmites australis is the most widely distributed. There is, however, morphological and cytological variation within Phragmites species, and in particular within the cosmopolitan P. australis, that has resulted in the description of a number of subspecies and varieties, whose taxonomic rank has been discussed and frequently revised. In Europe, two P. australis subspecies were proposed by Clayton (1968): P. australis ssp. australis, distributed in the temperate regions of both hemispheres in the Old and the New World, and P. australis ssp. altissimus, distributed along the shores of the Mediterranean, extending to Iran, Arabia, Kenya, Ethiopia and the southern edge of the Sahara. The name P. australis ssp. altissimus has been accepted in the world checklist of selected plant families in the Kew database, where the holotype is conserved. The epithet ‘isiaca’, referring to the borders of the ancient Egyptian Empire, is also frequently used for the Mediterranean Phragmites both at the subspecific and the varietal level…
The lack of structure within the European group, as opposed to other geographically distinct P. australis groups, suggests largely reticulate interrelationships within a metapopulation with indeterminable borders.
https://www.ncbi.nlm.nih.gov/pmc/articles/PMC3435523/

It grows whenever there has been an abundance of rain and the water remains in the lake for at least two years; and it is better if the water stays longer. People recall that this happened, in recent years, most notably at the time of the battle of Chaironea [338 BCE]. Before that, they told me, the lake was deep for several years, and at a later date, when there was a severe plague, the lake filled but the water did not stay in it: the winter rain failed and the cane did not grow. They say, and they seem to be right, that when the lake is deep the cane grows to a greater length, and if it stands during the following year it becomes mature. Thus grows matured reed cane [suitable for the zeugos, lit. ‘yoke’ of two reeds, one for each pipe], and that around which the water does not remain is bombyx cane [suitable for the body of the instrument].

The bodies of auloi were called ‘bombyxes’ because, when made from sections of bone, they look like a silkworm: 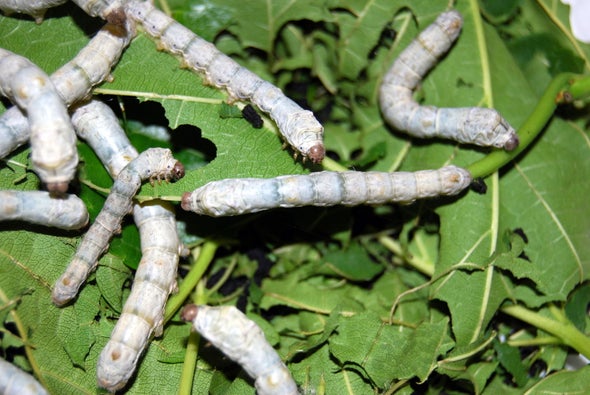 Several other traditions recorded by Theophrastus are worth noting:

Theophrastus describes several species of cane, none of which fits Arundo donax. The most likely explanation for this is that Arundo was not growing in Boeotia in the fourth century BCE, but is a later introduction:

According to the World Checklist of Selected Plant Families (Board of Trustees of the Royal Botanic Gardens, Kew), this species is native only to a fairly narrow area bounded by Cyprus, Kazakhstan and Turkmenistan in the west, the Gulf States in the south and Japan south to Myanmar in the east. The same source describes it as occurring as an introduction from the Atlantic Ocean island groups and the Iberian Peninsula throughout the Mediterranean.
(http://www.iucnredlist.org/details/164340/0)

Lotus wood and tibia bones were used for the bombyxes of more expensive, professional instruments – the ones buried as grave goods that survive in museums. Ancient Egyptian doublepipes, however, (several of which survive from around 1100 BCE) are made of Phragmites. This is also the species used for aulos-like reeds in living musical traditions all the way from Egypt to Japan.

Although the evidence weighs overwhelmingly in favour of Phragmites, my speculations above have yet to be tested. Above all, we need to find our modern-day “sharp bend” – the place where aulos reed-cane grows just right. Not too hard, not too soft; not too thick-walled, not too thin-walled. The story of the aulos revival so far has been one of reeds that are unbalanced and prone to cracking, or desperation lacking any reeds that work adequately. This is no fun. It puts a huge strain on a small number of reed makers and is incompatible with the historical evidence. There must be a better solution.

Please share your experiences using Phragmites australis here. By working as a community, exchanging pockets of knowledge, we have a better chance of building up within our lifetimes a level of expertise consistent with that of the ancient world.