In June 2017, Callum Armstrong upgraded to a deluxe Louvre model, developed for him by Robin Howell in Toronto, Canada. Callum’s first performance playing this ‘Rolls-Royce’ instrument was at the 10th MOISA Meeting in Oxford last July:

The photographs above and below are of a similar instrument, the twin of Callum’s but with imitation-ivory and brass mounts. It is currently for sale. Robin has a serious illness and it has been my pleasure to help him out by preparing this deluxe Louvre for some lucky customer, making the reed-caps, reed-case, hard case, hole-closing mechanisms, and gently breaking it in so that the joints and reeds settle down and reduce their misbehaviours. As with all children, compassionate parenting is required in the early months of an instrument’s life, particularly one made from organic materials like cane and boxwood. 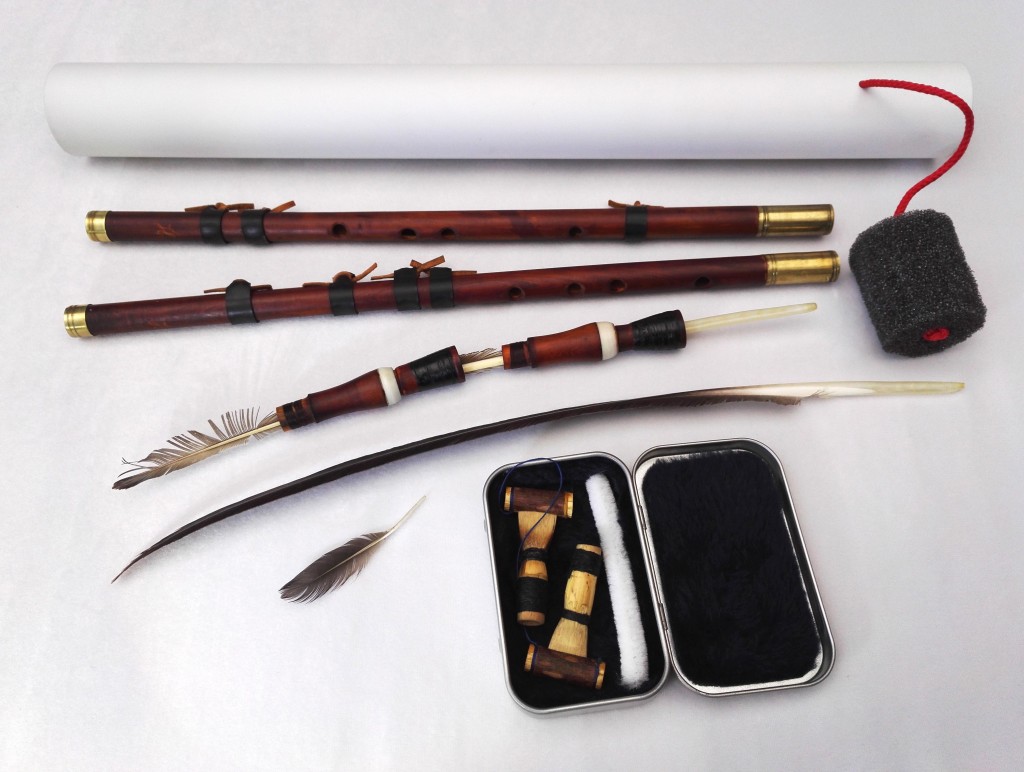 The long feather and white pipe cleaner are for cleaning and drying bores and reeds after playing. I use them together with disposable absorbent paper and have started washing out my reeds under running water, so the blades don’t stick together from residue build-up. The shorter feathers are for periodic oiling: almond oil for the bores and rapeseed oil for the reeds. This oiling significantly lengthens the life and improves the tone of both the wooden and cane components. Every week, I sanitise my reeds with 3% Hydrogen peroxide – a minute of fizzling using the pipe cleaner, inside and out, before rinsing them with water, carefully drying with absorbent paper, replacing the reed caps, and leaving to dry somewhere safe where air circulates. Mould shortens reed life and is a health hazard.

ALWAYS replace your reed caps: they are your insurance policy. Treat a good pair of reeds as your most valuable possession. The labour alone puts their price into several hundreds of dollars/euros/pounds. If they are going to give satisfaction, then the work involved in making a pair of aulos reeds will be 24 hours minimum spread over several weeks, sometimes months. Multiply that by a skilled hourly wage and you get the right price. There is a lot more to it than making two reeds! 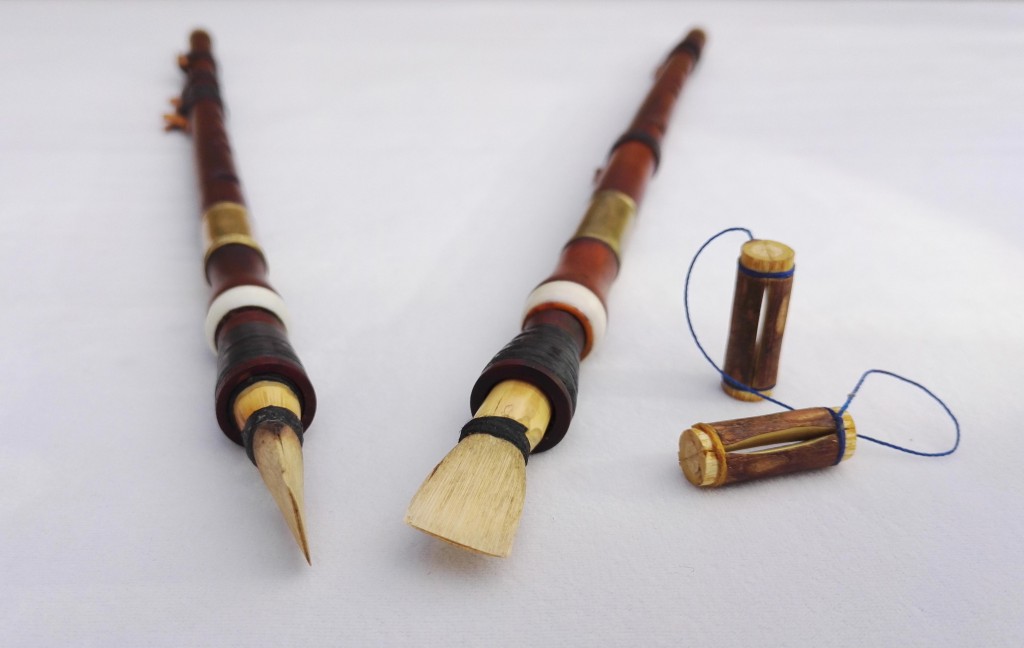 Although I am barely beyond beginner status playing the aulos, it is nonetheless clear to me that Robin has a magic touch in the arts of reed making and voicing woodwind instruments – transforming an instrument that appears finished to the eye into something that really sings when you tickle it. The acoustic response, the harmonics, the tone quality, the vibration under the fingers: don’t be influenced by what a Howell instrument looks like; this is a maker whose mastery lies in what the aulos sounds and feels like to play.

Callum and I agree: if you are going to invest hundreds or thousands of hours in practising, then it is worth paying more for an instrument and particularly reeds that make your soul sing. The 3-piece design of this Louvre model (with separate cup, bulb and bombyx) is prompted by the evidence of archaeological finds that appear to be professional instruments, such as the Pydna aulos and the Pompeian tibiae.

Callum has been playing his intensively over the last 9 months. He writes:

Mine is very subtly-voiced instrument. Its three-piece design may be one of the factors contributing to its fine tone, particularly when you pull out the cups a little, creating chambers in the bore. But more practically, the cups are invaluable for tuning the pipes to each other quickly, or tuning to other instruments that may be a bit flatter or sharper. They also allow you to change the angle of the reed easily and safely, by rotating the cups rather than having to gingerly twist the reed in the reed seat in a way that could crack the reed.

For the hole-closing mechanisms, I am using Mylar A4 sheets (125 micron polyester film), cut into strips and carefully heated with a candle to make it curve and wrap snugly around the pipe. I pull the Mylar strip tight, cut, and bind with a quality tape. The result is an airtight seal that slides easily up and down, so I can change the instrument’s setup quickly. No lubrication is required.

You can hear my humble attempts to test-drive the twin of Callum’s instrument in the recording below. Put it into more capable hands – or rather, more capable lips – and it could do an awful lot more! It’s majestic response, however, helped me to realise two things:

Halfway through the recording, I play some bars from this Athenaios score.

I am very reluctant to let this aulos go, but wish its future owner well. Above all, I wish Robin a smooth road back to health so that more people can experience the joy and enlightenment of playing his instruments.

3 Responses to A Louvre deluxe model by Robin Howell