Introducing the aulos of Poseidonia

Last week, I had the honour of playing the aulos of Poseidonia beside the original in the ancient city of Poseidonia, 100km south of Naples. Here I am with Marco Sciascia, who made a reproduction for the EMAP exhibition in 2015: 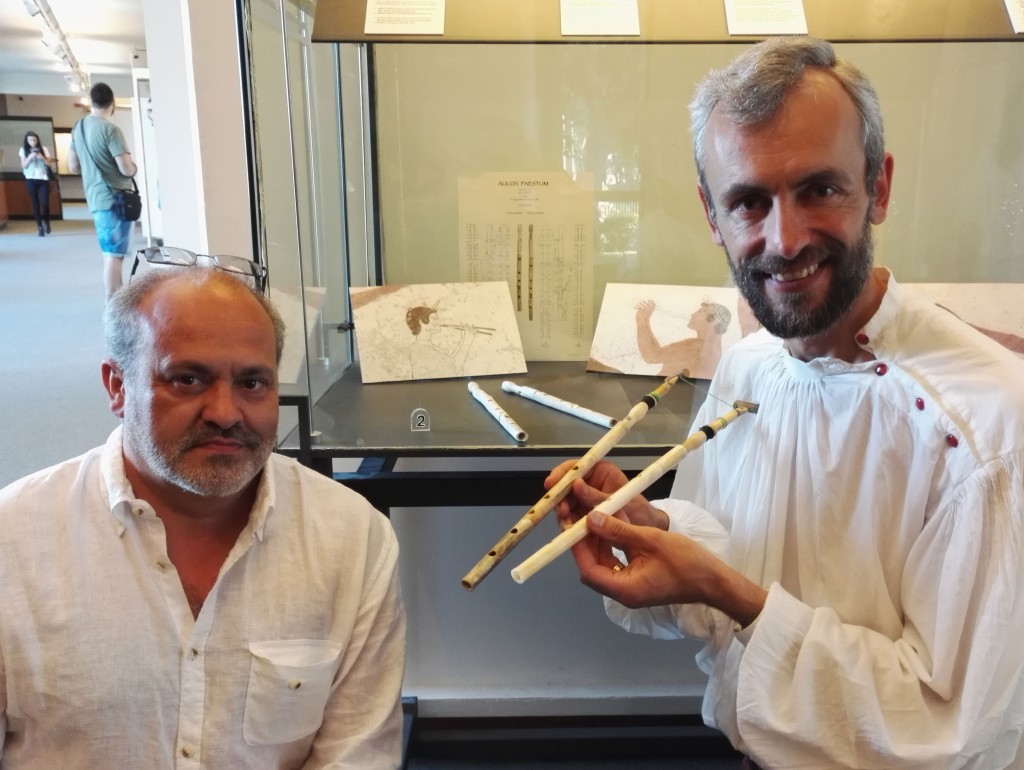 Marco finished making a reproduction for me in October 2016. Since then, I have been slowly learning to play it with the help of excellent reeds and mentoring from Robin Howell.

The original was buried in around 480 BCE, two centuries before the Romans took control and gave this prosperous city its modern name of Paestum. This is also the date of the site’s most famous mural, the Tomb of the Diver, which depicts a symposium featuring two aulos players and two lyre players:

The colours of the two auloi and the relative size of their players suggests two different instrument types: a smaller wooden aulos (above), and a larger bone aulos (below).

As well as accompanying songs at exclusive parties, the aulos of Poseidonia could have been played in two of the city’s great temples: the so-called Basilica (to Hera or Apollo?) and the Temple of Athena. Building work on the largest sanctuary, the Temple of Neptune, was just beginning at around the time the aulos was buried.

The Poseidonia aulos was found in 1969. Detailed studies were published by Paul and Barbara Reichlin-Moser in 2012 and by Stelios Psaroudakis in 2014, each with meticulous measurements and close-up photographs. It is sometimes called the Paestum aulos, but this name dates from a later period.

It is an exceptionally well-preserved instrument from a time and place that represents a summit of ancient Greek culture. Poseidonia was founded in the 6th century BCE by Greek colonists. Walking around the museum today, it is clear that their pre-eminent musical instrument, both in sacred and secular contexts, was the aulos. Fancier types with more holes and metal keys probably began to be developed in the 5th century, but the archaeological record points to them being a 4th-century phenomenon. The Poseidonia aulos appears to be not only Classical in period but classical in form. A practically identical instrument was buried in Pydna, ancient Macedonia, a century later (400–350 BCE).

Perhaps this doublepipe occupied a place in 4th-century Greek culture comparable to that of the violin in Western culture today; and the doublepipes with moving parts occupied a place more like that of clarinets and saxophones. The point of making this comparison is that it helps us to imagine a more complex and nuanced ancient reality. Musical styles, repertoires and conceptions would overlap and intermingle. A mechanised instrument with more notes does not imply greater artistry in the players, a more refined type of music, or the loss of elite status for an earlier type of instrument – certainly not among those of educated or conservative taste.

Despite lacking chromatic mechanisms, the Poeseidonia-type aulos is compatible with the modulating style that became popular in the 5th-century BCE, the so-called ‘New Music’ scorned by Plato and others. In the following videos, I demonstrate how it is possible to play any scale with accurate intonation. Although I would not exclude half-holing, I find it relatively clumsy. For precision and speed, I prefer to use tiny movements from the elbow in combination with micro-adjustments in lip compression.

My playing in these videos represents humble beginnings, miles short of what the instrument is capable of. I am just far enough down the path to know that this type of aulos is a noble musical instrument, promising rich rewards in proportion to the hours spent practising. The professional auletes of ancient Greece probably put in as many hours as music students do today. I wish I was starting in my teens, not in my 40s! I certainly want to continue and hope others will join me.

This entry was posted in Early auloi, Learning to play and tagged Paestum, Poseidonia. Bookmark the permalink.

5 Responses to Introducing the aulos of Poseidonia