Posted on 5 June 2015 by Callum Armstrong

This tool makes short work of cutting tubes in batches, all the same length. The end stop is adjustable because the length of reed varies from aulos to aulos. 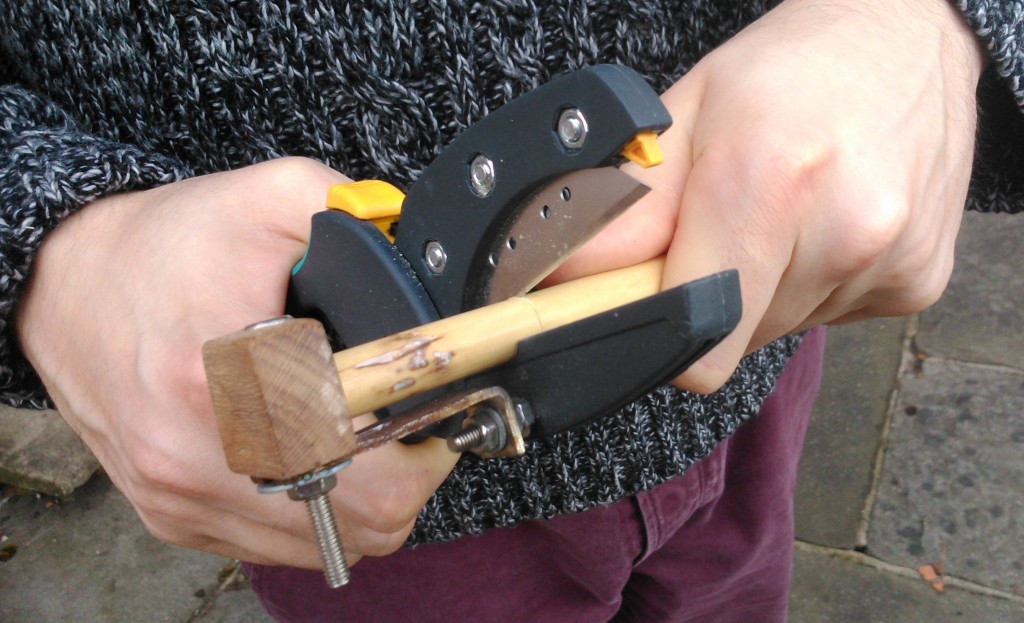 After cutting the tubes, I now use a sharp scalpel blade to remove the bark, first slicing consistently with the grain, then scraping lightly to remove small ridges. This achieves a smoother finish and you can be more precise than with sandpaper. 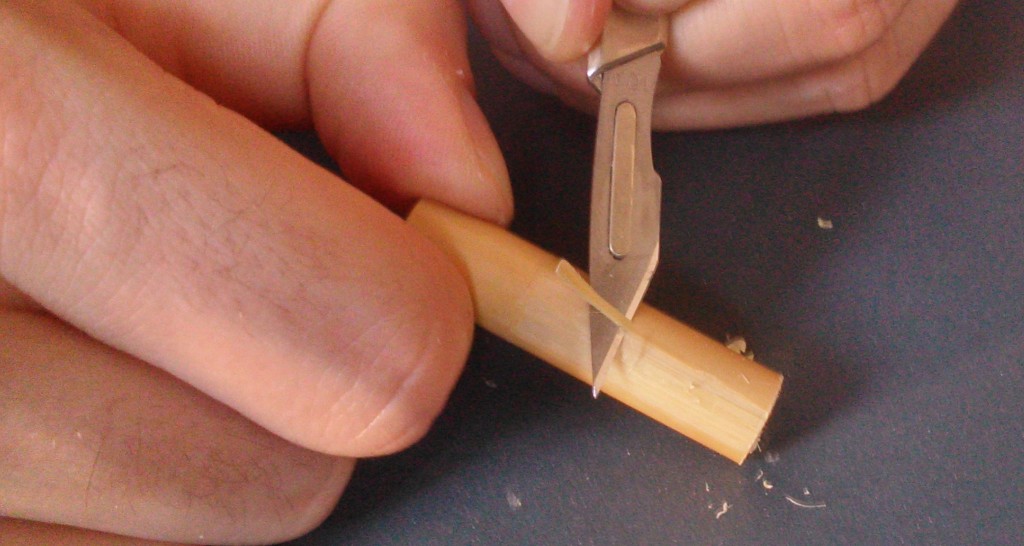 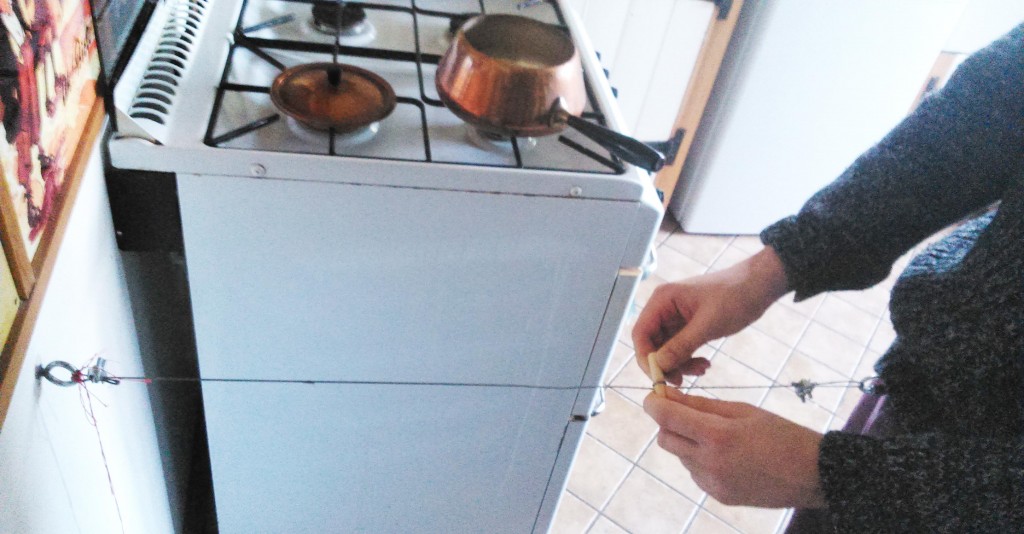 Apparatus for constricting the waist.

Forming the waist, I use bicycle gear cable with wire rope grips at each end to form loops. These are FIRMLY fixed to something at waist height, beside a pan of boiling water. 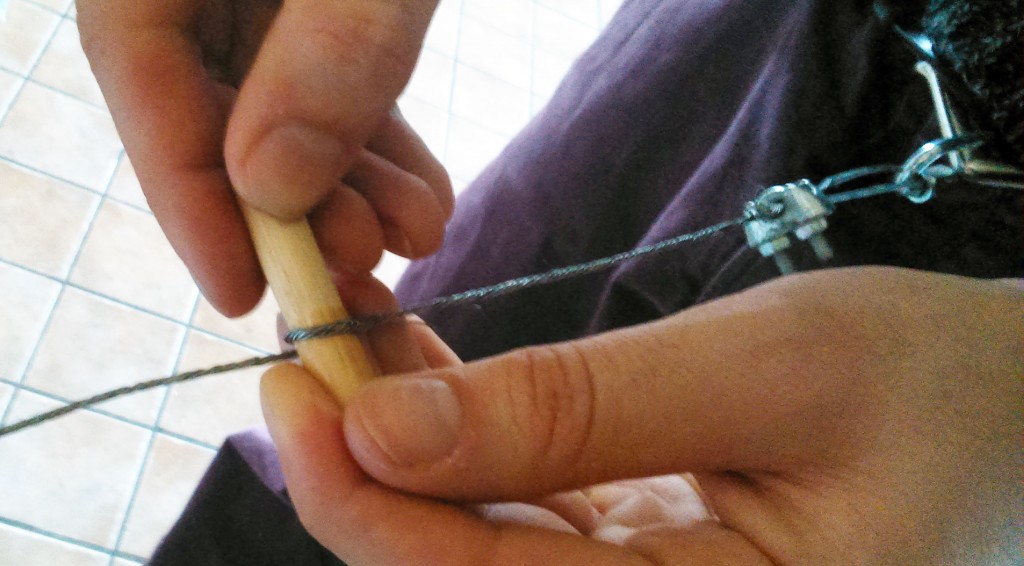 Leaning back with hands free to rotate tube.

With the gear cable fixed to my belt buckle, I rotate the hot, wet tube back and forth between my fingers and thumbs while leaning back to tighten the cable. For its hardness and lower friction, it helps to have the shiny protective bark under the cable. The tube must be freshly boiled for the waist to form easily and evenly.

I don’t use a metal rod any more: it gets in the way and is more of a liability than an aid. For the batch that Barnaby took to Berlin in March, I tightened the waist until it was completely closed. The waist opens up again a little on releasing the cable and binding with waxed thread. This way, I can control the final waist size more precisely.

With some of the reeds in this batch, the internal fibres frayed, lifting up on either side of the waist. In Berlin, finishing reeds for the Pompeii aulos, Stefan Hagel removed these loose fibres and advised me not to constrict the waist so far. Cleaning internally above the waist is a difficult operation! After this Skype conversation with Stefan, I cleaned out  loose fibres on other reeds and found this greatly improved the sound. 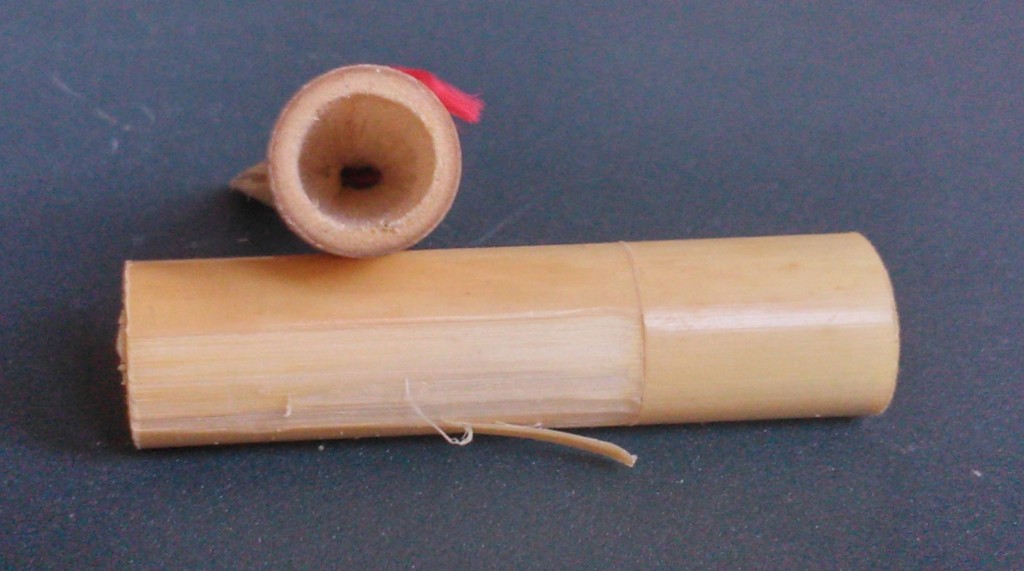 A finished waist interior (above). Removing the bark and golden fibre layer (below).

If the waist is too tight, the blowing pressure is too high; if the waist is too open, the air flow is too high – it is about achieving low airflow without having to burst blood vessels. What we want is equilibrium between the thickness of the blades and the constriction of the waist, so I tried adjusting the inside diameter of the waist using beeswax on a heated needle. I ran the needle along beeswax until a drip formed, then poked it inside the waist and ran it around to build up wax, reducing its size.

A temporary bridle made of cane and waxed hemp.

Wrapping thread around as a bridle opens up the lips, making the reeds harder; when cane slips are inserted under the thread, however, pressure is applied at the centre of the blades which closes the lips, making the reeds easier. These bridles are highly adjustable – you can pinpoint where you want to apply pressure, and they don’t slip or gouge into the cane like wire, forming a rut.

If you go for the softer cane (the ‘deep pith’ layer), the reeds form more easily but you loose sound quality – the tone is duller. Closer to the bark, the cane is springier and harder to blow, at least initially. But I believe that perseverance will create reeds that last longer, sound better and are more reliable.

Previously, my success rate was about 50% (6 out of 12). I was heartened to discover that this was also the case in ancient times:

[Aulos cane] generally differs from other types of cane by a kind of inherent thriving condition, being fuller and more fleshy and overall of female aspect. It also has broader and brighter leaves, but a smaller plume than the others, some having none at all, which they call barren-cane. From these, some hold, the best reeds are produced, though few work out right during the process of manufacture.

Does this mean that using ‘barren’ cane (i.e. with no flower) reduced success rate but might be worthwhile to achieve a superior quality of reed?

Increasing the blade length on 8 March increased my success rate to 10 out of 12. Was this improvement a result of: 1) a longer blade length, 2) variation in the nature of the cane, or 3) me becoming a more proficient reed maker? 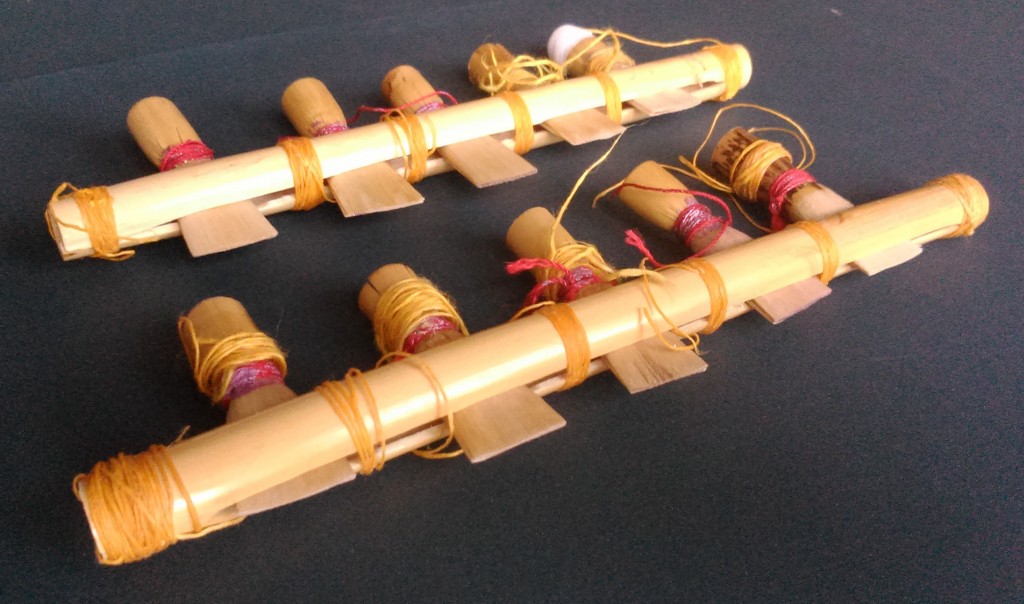 Batch formers made of cane.

These clamps are quick and easy to make, but perhaps not as good as split dowel rods, or half rounds, which press on a larger surface area of the blades.

Thanks to Barnaby Brown for the photos and for co-writing this instalment. See also:
Part 1  |  Part 2  |  Part 4 coming soon…

This entry was posted in Reeds and tagged bridles, reed making, reeds. Bookmark the permalink.