This is the second instalment of Callum Armstrong’s reed-making journey — the first is here.  We made these notes and photos before a London Aulos Group meeting on 6 January 2015. 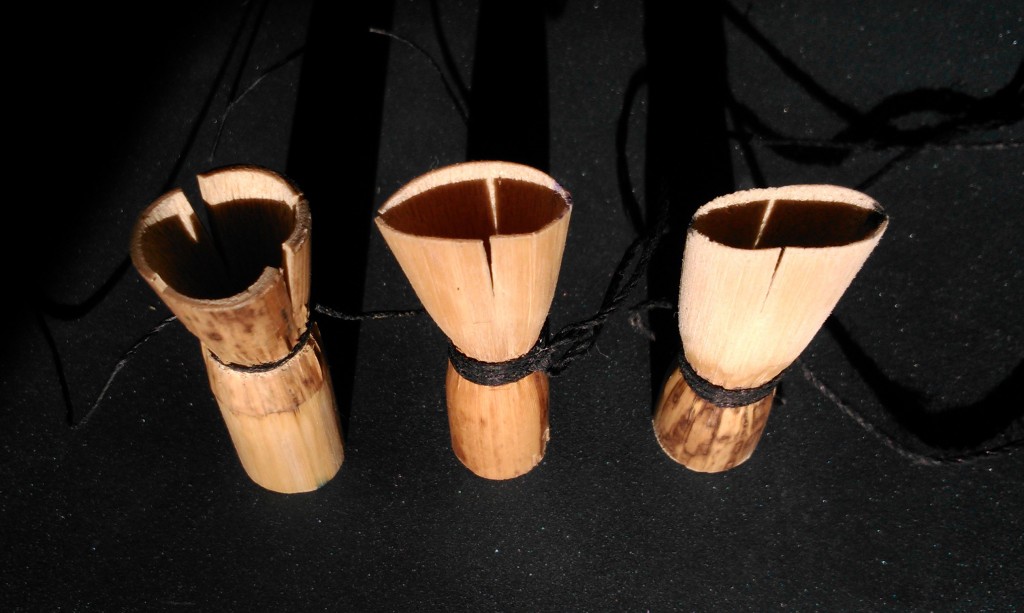 1. End unbound when constricting the waist. 2. Fibre band not removed. 3. Lips too thin.

This photo shows three different causes of cracking. Here are our suggested solutions:

Callum made the following points:

I think there are two reasons for cracking at the lips: either too much of the fibre band is left on, or the lips are uneven in thickness and crack at the thinnest point. A couple that would have cracked I saved by scraping either side of where I thought it was going to crack, evening out the surface.

If you need to constrict the foot to fit the reed seat, then insert a rod to tighten around in order to prevent buckling like this:

The problem I have still to solve is air efficiency: they take too much air. After a while the reed settles into a position where squeezing is no longer required to make it playable. Until broken in, however, the reed wants to return to its pre-boiled shape. As soon as you wet the blades, they start to pop back. A ‘cold former’ is therefore essential for the first few days, perhaps weeks. The only alternative is a permanent bridle, but this contradicts the ancient evidence presented by Olga Sutkowska. 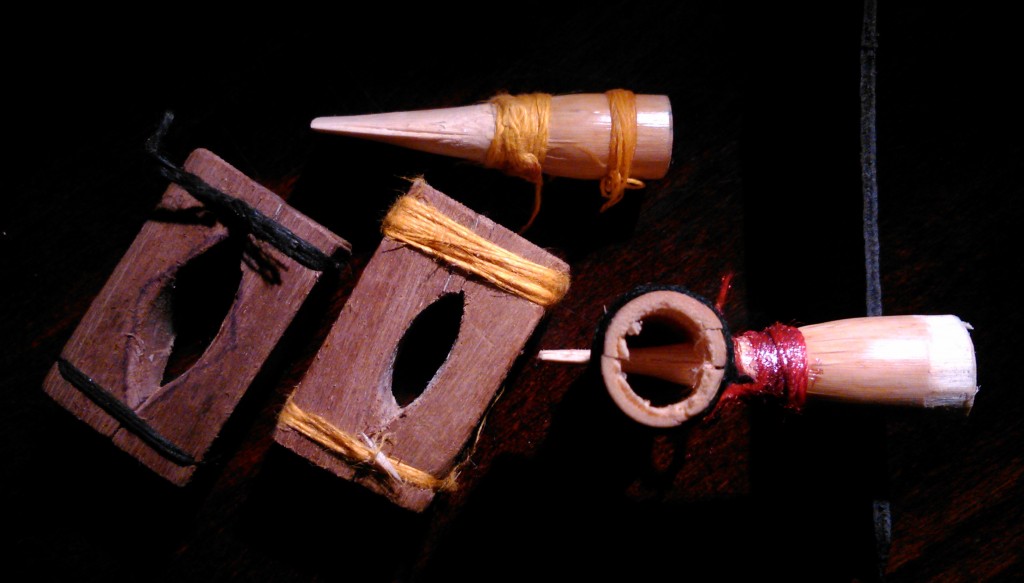 This photo shows two finished reeds and the formers I used to persuade the blades into their new shape. Hot former 2 has a shallower gradient than former 1 in order to reach the base of the blades. If the blades are going to crack, they crack in hot former 2. The cold former is for breaking the reed in over the first few days or weeks, with the reed drying out in the former after each playing.

I thought toasting might help the reed to keep its shape, but there must be knack which I have not yet discovered. I practised toasting several cracked reeds, but when I tried with a good one, it cracked in the usual place. These are much more delicate than duduk reeds!

The crescent shape of musette scrape didn’t work; a more even scrape, leaving thick blade tips, and using the cold former to flatten the base of the blade is what I find works. You loose tonal colour by scraping the tips and it doesn’t increase the air efficiency.

You can tie the waist, form the blades, and reduce the foot in direct succession, but you must then leave the reed to dry overnight before any further work.

This entry was posted in Reeds and tagged formers, reed making, reeds. Bookmark the permalink.