Posted on 18 December 2014 by Callum Armstrong 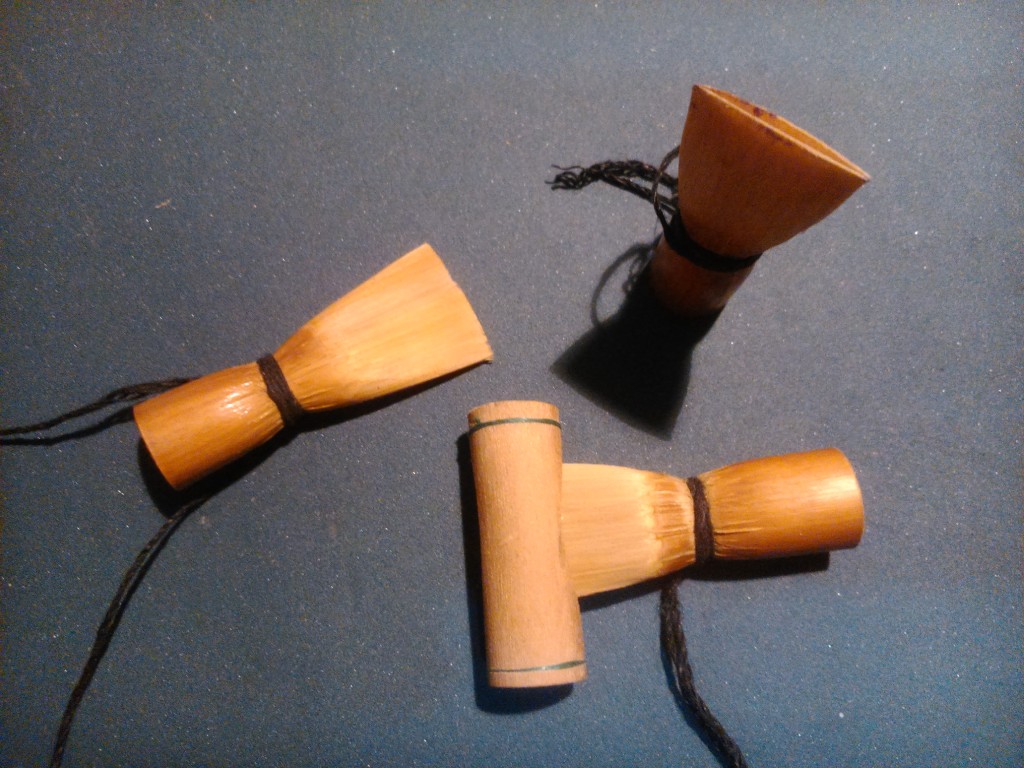 Barnaby Brown invited me to join the aulos revival when we performed together in London last month. These notes build on what Barnaby learned from Stefan Hagel at reed-making workshops held earlier this year in London and Tarquinia.

3. Thin proximal ends by filing inside

I was taught by Francis Wood how to heat and squeeze a plastic drinking straw to form a reed (he makes a ‘disposable’ bagpipe). The result looks quite similar to the drawing of the lost Berlin aulos reed, so, instead of pushing the cane into a metal former, or clamping it in a screw press, I thought I would try squeezing the blades by hand, using the feel of my fingers.

I used four fingers (thumb and index of each hand) to find where the sides would come together most comfortably, rotating the cane while repeatedly squeezing and relaxing it. If any area seemed stiff and likely to cause a split, I thinned that area using a file.

Once I had decided on the orientation of the mouth, I brought the lips closer together by squeezing the corners between my fingers and thumbs: this avoids putting pressure on the central area.

When I felt the cane had cooled and was stiffening, I dropped the reed back into the boiling water. Each time it went back in, the mouth returned to a near-circular shape, but the next pressing was easier. I didn’t need to mark the corners of the mouth: they were relocated by feel and by eye. I repeated this two or three times, until the mouth closed sufficiently to fit comfortably inside my forming block.

Once partially in the forming block, I dropped it back into the boiling water in the block. Every half minute or so, I picked it out, removed it from block and massaged it with my fingers to encourage it to form a symmetrical aperture. I then pushed it a fraction further into the block and dropped it back into the water. If the lips were not coming together evenly, then I filed the relevant area from the inside to improve their symmetry.

On the second or third inspection, depending on how well the mouth was closing, I made two incisions from the corners of the mouth towards the waist, following the grain. These were not deep enough to cut through the cane, but served to encourage any splitting to occur  along the edges of the fold, rather than on the flat surfaces.

I found 5-6 little pushes were sufficient to close the lips. I then removed the block and continued squeezing the blades with my fingers.

This entry was posted in Reeds. Bookmark the permalink.

3 Responses to My first aulos reeds